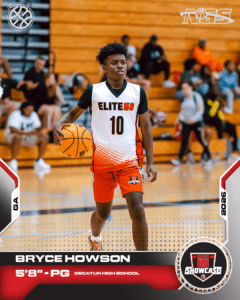 Howson is a pure volume scorer. When he got hot at the Elite 60 Freshman Showcase there was nothing defenders could do to stop him from getting the shot he wanted. Howson scored in bunches and made it clear he’ll be the spark for his team. Attacking the basket is a specialty of Howson’s. He showed a flash of playmaking once the defense would start to collapse on him. Howson’s overall game is forming and he’ll have 4 years of high school to polish everything. by Bilal Benjamin of 1st Love Basketball