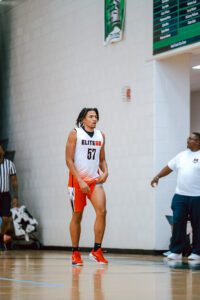 Jossiah won the dunk contest, which already gives you a look into JJ as an extremely athletic player. He is a high riser that plays above the rim with ease and is a force in the paint and near the cup. He has a good physical body, embraces contact, and finishes thru contact. He rebounded at a high rate, especially on the offensive end, as he kept possessions alive for his squad and even got some easy put-backs at times. He was limited after the dunk contest as he came up limping after one dunk. He is an explosive athlete worth keeping an eye on this upcoming season. by Terry J. Drake of Prep Hoops

There wasn’t a cut to the basket or fast break opportunity that Johnson didn’t believe he could finish with a dunk. Johnson is a player that grabs a defensive rebound, push it in transition and make the right play. Whether he’s keeping it for a monstrous finish or finding a teammate in stride. As Johnson continues to grow, he’ll be looked at even more as a point-forward.  by Bilal Benjamin of 1st Love Basketball