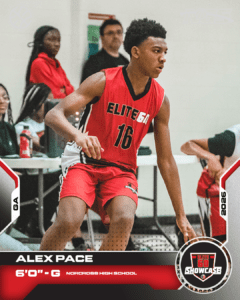 Alex was one of the toughest PGs throughout the entire camp. His attack mindset was written all over his face as he played with the tenacity of devouring anyone that got in his way. He’s tough and fearless and willing to take on all challenges. No matter who stepped up to challenge him, he quickly put them on their heels as he was aggressive in his attacks off the bounce. AP Has really solid handles and can shake the defender and get into the lane or create space for his jumper, which puts defenders in a state of complexity as they are left guessing what he is going to serve up at the moment. He orchestrates well, pushes the pace in the right moments, can shoot the trey-ball, and even locks up on the defensive end of the floor. He is a player that anyone would love to go to war with on any given night.  by Terry J. Drake of Prep Hoops

Pace is a lead guard that looks comfortable most when the ball is in his hands. The way he got to his spots to knock down mid-range jumpers or dump the ball off to bigs was very impressive at the Elite 60. Pace can play off the ball too, because of his ability to shoot the ball. With the leadership and decision making Pace displays, coaches would prefer the ball be in his hands. by Bilal Benjamin of 1st Love Basketball