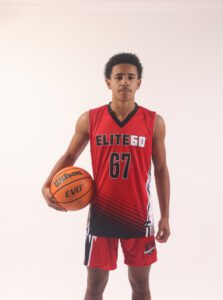 Scouting Report by Tony Bruton of BucketReel
Simply put, Caden Earl puts the ball in the basket. He has a tremendous first step and routinely blows by his opponents off of the dribble. His jump-shot has a high release point and he comfortably knocks down pull-up jumpers all the way out to about 20 feet. His footwork is also impressive for a player his age. At times, he confuses defenders with his ability to score from the mid-post area as a guard. Keep an eye on this kid.