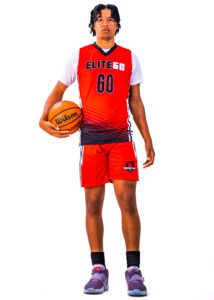 In most areas of the game, a 6’4 center is not considered good positional size. However, for the Elite 60, the 6’4 frame was enough to be very impactful. One of the things that separated him from most of the frontcourt players at camp was his motor. He just kept coming on each possession, and his physical play wore down opponents over the course of the game. His activity on defense and on the glass was at a level that many could not match. Corey plays with an edge and is incredibly disruptive defensively as the kind of player who can blow up a pick-and-roll by attacking a ball handler or by erasing shots in the paint as a rim protector. Offensively his low-block isolation style on offense was almost unstoppable throughout camp. His mobility is central to his value on both ends, as he is a major factor on both ends of the floor.

One of the things that separated him from most of the frontcourt players at camp was his motor. by Terry J. Drake of Prep Hoops