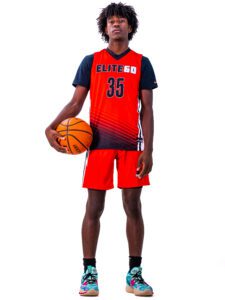 ELITE60 Freshman Showcase – September 24, 2022
It became obvious that Hutcherson is the real deal in less than a minute of his first appearance. Devin is a player that has a high powered first step and attacks the rim with authority. He uses his explosion well on both ends of the floor. It’s a routine to see him convert chase down blocks and to secure rebounds out of position. College coaches will be in touch with him very soon. by Tony Bruton of BucketReel

MVP! Hutcherson won Co-MVP of the Elite 60 and it was a well deserved honor. When you stand out in a showcase of projected high-mid major players that says a lot about your competitiveness and overall will. Hutcherson is an all-around Wing that flourished in the open court and half court settings. He moved extremely well without the ball and trusted his teammates to make plays. In a showcase environment that speaks volumes to the type of player he is. Hutcherson has all the intangibles and tangibles needed to be at the top of this loaded 2026 class.  by Bilal Benjamin of 1st Love Basketball