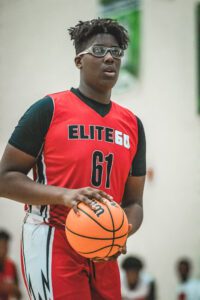 Sheffield was very forceful throughout the Elite 60 Freshman Showcase. He has good footwork and a nice touch around the rim. Sheffield uses his size to his advantage to seals off defenders in pick & roll action. Another impressive attribute in Sheffield’s game is the way he pins his man under the basket when posting low. As he gets stronger, he will be an outright force to be reckoned with throughout high school. by Bilal Benjamin of 1st Love Basketball