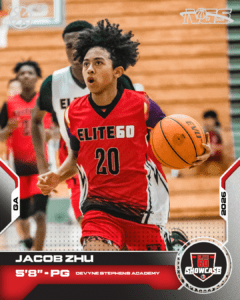 There weren’t any guards that Zhu faced that he didn’t score against. He’s very crafty with his dribble and never stops attacking the paint. Whenever defenders were able to successfully keep him out the paint, he would bury shots from 25 feet with consistency. Overall, he’s a very good young player. Despite being on the smaller side, he rarely committed a turnover and he showed off a very tight handle on the ball regardless of the size of the defender. by Tony Bruton of BucketReel

Zhu may have been the most impressive lead guard at the Elite 60 Freshman Showcase. Zhu had games where he completely controlled the tempo. His shooting was so astounding that his passing went under the radar. Zhu is a small guard that I like to call a Land Rover. The Steph Curry’s and Trae Young’s of the world. They don’t play above the rim, but there isn’t a place on the floor they can’t score from or get to comfortably. by Bilal Benjamin of 1st Love Basketball