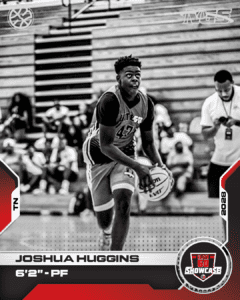 Scouting Report by Keith Agran of On the Radar
Among a small number of guys on hand who showed off some advanced back-to-the-basket tactics using good footwork and crafty moves.  Huggins aggressive posture and size made for matchup advantage, and he went to work on every opportunity.  Huggins is a good rebounder, a hard worker, and has some face-up range out to 15 feet.  Standing around 6-2 right now, if he gets to 6-7 or better with an already good understanding which will grow, he’ll be a name from TN we’ll be hearing a lot of.

Scouting Report by Robert Drew of Hoop Dreams
Joshua is an all around polished 7th grade basketball player.  Physically gifted already at 6’2, paired with one of the highest basketball IQ’s in the gym made it easy to see Huggins was a legitimate prospect in the 2028 class.  Mature finisher at his age, as defense rarely fazed him at the basket as he scored on line drives and put backs with ease. Huggins was a monster on the glass on both ends, seems to just have the savvy on how to track rebounds and he works hard to carve out more than enough space to corral them. The versatility he possesses is special to be so young.  Joshua can operate as a secondary playmaker who you run offense through, and he was also one of the best defenders on the interior throughout camp. Whether blocking shots or just altering attempts, his presence was felt as a rim protector. Overall Huggins gave out a lot of tough buckets without giving up much of anything on the other end he could get his hands on. A strong weekend for the Nashville,TN  stud.