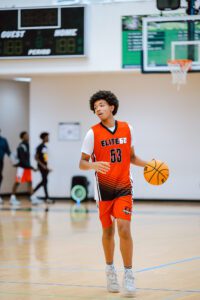 Allen was one of the smoothest playmakers in attendance. He’s got a calm demeanor on the court and his teammates seem to enjoy playing with him. What I liked the most was his willingness to feed the post players. It’s always good to see capable scorers make it a priority to keep everyone involved. With the development of his strength, he could become a deadly inside-outside scoring threat from the guard position. A true big guard.  by Tony Bruton of BucketReel

Allen’s game is so good it’s hard to believe gems a freshman. Already standing at 6’4”, Allen has all of the big guard qualities. He will probably grow more which will allow him to play the guard position and on the wing. Allen can defend positions 1-4. His game is mature and he doesn’t settle. Allen’s a three level scorer that showed he can be efficient. His playmaking made him virtually unstoppable. As the explosiveness comes into play for Allen he has the talent to be a top 5 player in the class of 2026. by Bilal Benjamin of 1st Love Basketball