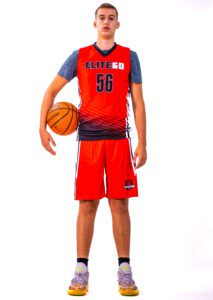 ELITE60 Freshman Showcase – September 24, 2022
Rivers is what many would consider a “throwback” big man. He mainly operates from the post area, but wasn’t scared to step out and knock down 3’s. He’s got a soft touch around the basket, good footwork from the low post and showed flashes of wing skills. His bread and butter however is currently in the paint. There wasn’t much anyone could do to slow him down when he sealed off his man. Potential to be a big time recruit. by Tony Bruton of BucketReel

MVP! Knight’s name was buzzing throughout the day at the Elite 60 Freshman Showcase and he won Co-MVP. Inside, outside, mid-range, three ball, putting the ball on the floor, rim protection, rebounding and solid screen setting; you name it, Knight did it. His skillfulness as a big man is exactly what you want in todays game. He put on an absolute basketball clinic and it’s expect for him to do so over the next 4 years of high school. Knight is a high major prospect and rightfully so! by Bilal Benjamin of 1st Love Basketball