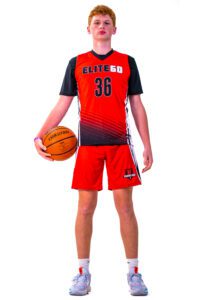 ELITE60 Freshman Showcase – September 24, 2022
This kid attacked the basket with bad intentions. He had the dunk of the day in the all-star game. Once he receives the ball in stride, he’s going to slam the ball home. On top of his athletic displays over the rim, he plays with a high motor that allows him to corral a ton of rebounds. Defensively, he shows flashes of a versatile defender that could eventually defend guards and forwards. A lot to like. by Tony Bruton of BucketReel

Dopfer was easily the most shocking. His athleticism left me in awe and made me want to witness more of his overall game. Dopfer slammed a two handed dunk that lit the gym up. Running the floor is a specialty of his. Dopfer showed flashes of his ability to play on the wing. Those skills will be in constant development throughout high school and he’s only going to get better. With the motor and will he has, there’s no limit. by Bilal Benjamin of 1st Love Basketball